Local historian David Sherratt and Minal residents Tom and Jill Otley have erected a plaque to commemorate Rev Charles Francis who paid for the bridge over the River Kennet at the Werg in the early 1800’s. 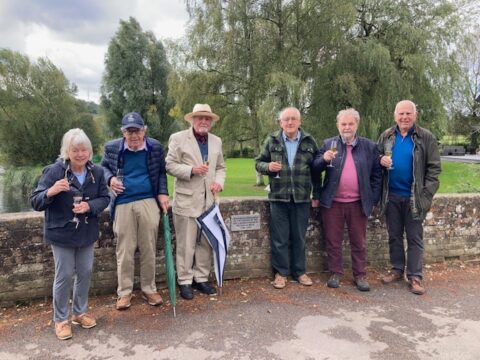 David is well known locally for his researches into local history and has recently made a study of the life of Charles Francis who lived from 1751 – 1821.  This was a time of privilege, pleasure and piety made popular recently by the hit TV series Bridgerton.  Charles’ career  benefitted hugely from the patronage of Thomas Brudenell, the Earl of Ailesbury who granted him several rich livings in Yorkshire and Wiltshire which gave him considerable wealth.  In return, like many men of the time with a social conscience, Charles used his money to build the Werg Bridge together with the old school in Thicketts Road.  He was also responsible for repairing and refurbishing Minal Church in 1816 and contributed towards the cost of the new extensive woodwork which is thought to have been done by carpenters working on Tottenham House which was being built at the same time.

Parish Councillors met with David and Tom to raise a glass in celebration of the new plaque.  Parish Chair, John Bevan, thanked David Sherratt for initiating and paying for the plaque and Tom and Jill Otley for causing it to be erected on the bridge where it will be admired for years to come.