About Mildenhall known locally as Minal 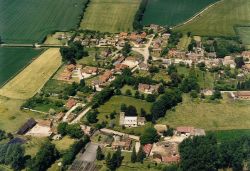 The boundary to the south was with Bedwyn although that has been replaced with a newly named parish of Savernake. The eastward boundary with Ramsbury parish is very much as it was centuries ago. Both of these inter-parish boundaries are very old indeed and in places are marked with ditch and wall from Saxon times. The north-west boundary with Ogbourne St. Mary is almost unchanged since Norman times.

In the Dark Ages, there were three centres. Bedwyn was the old cultural centre of the district as well as being at the heart of the Royal estates. Ramsbury was the ecclesiastical focus and has a bishopric dating to 909 AD. And the small town of Marleburg (Marlborough) was the commercial centre and main market. The parish of Mildenhall was roughly in the centre of these three, but when the Roman centre of Cunetio became deserted in about 450 AD, Mildenhall slowly declined and became less important as a geographical place, and instead developed as a large prosperous farming community and has remained so for many centuries.

Within the parish there are two other large hamlets or farming communities, those of Stitchcombe and Poulton. Both of these were important enough to feature in the Domesday Survey of 1086. No other place is so mentioned, except for Mildenhall itself. By the sixteenth century several large farm communities had been established and still exist to this day. The Marlborough Downs rise to 700 feet in the north, while the plateau of Savernake Forest to the south is about 600 feet. The great valley of the River Kennet divides these two features and is between two and three hundred feet lower at an average of 400 feet above sea level. In the soft chalk, the Kennet valley has been relentlessly cut down by the surface waters which originate in the west at Silbury Hill. The drainage eastward towards the Thames at Reading has steadily eroded the soft curving valley into its present shape.

As has already been stated, the proper name of the parish and the village is Mildenhall. The earliest record comes from Saxon times when it was Mildenhald, and the Carlularium Saxonicum gave this spelling. The Domesday Survey of 1086 gave the name as Mildenhalle but in 1282 the Charter Rolls called it Mildehale. By 1269 the Calender of Patent Rolls and also an Inquisition Post Mortem gave the name as Mildehall. Both Midnall and Mylenoll occur in the records of the sixteenth century. Middenhall was used in the Intrerarium Angliae of 1675 but the present full name also occurs about this time. These differences could well be incorrect interpretation of the name when spoken.

About 1760, it can be seen that a new form, that of Minal, was being used. It is very possible that the difficulty of dealing with the three syllables of Mil-den-hall was too much for the local folk who may never have seen the name written down, and who relied only on the pronunciation. They slurred the three syllables together to sound something like “Minorl” which was easier to say, and this in turn, became as Minal. After all, the church is called “Minal Church”, both the old and new Village Halls were and are referred to as Minal Village or Parish Hall and the farming community to the north-east of the village is Minal Woodlands.

As with many ancient parishes, local names abound. Cock-a-Troop, possibly a name associated with a signal station or look-out, names perhaps the oldest right-of-way in the parish, following as it does the Roman road south towards Winchester. Another piece of the Roman way has now acquired the name of Greenway. This passes a site known as Ethelred. Chopping Knife on the south side of the valley has a more recent history. It was where folk came to cut sticks for their peas. The strangely named hamlet of Werg was a community of nine dwellings on the River Kennet. One of the many pools on the river, as it wove its way through the water meadows was “Nicker Pool”, where it is said the water spirits played. When the climatic conditions are right, the whirling wraiths can still be seen, so that the local name had good cause to be established.

There is only one other village in Britain called Mildenhall and that is in East Anglia, now the site of a vast United States airfield.

Stitchcombe was Stotecome in 1086, Stotecumb in 1217, Stutescombe by the thirteenth century and fourteen other variations since then. It is now a shadow of its former self but still the centre of a large farm. Poulton was Poltone (the farm by the pool) in 1086. There were eventually two farms there, Poulton Magna and Poulton Parva.

Spellings of Minal
Throughout its life, Minal has gone through a gamut of variations in the way that its name was spelt and pronounced, and as a village has been found in records since the early 9th century. In the Domesday book, in 1086, its spelling was Mildenhalle, but over the years the various spellings and the years that they were recorded are:-

The village of Mildenhall although spelt this way, had been pronounced Minal by the local residents for centuries. During the long standing rectorship of Rev Courtman, who retired in 1978 at the age of 94, he changed the name of the church to Minal Church, and so one can see both spellings used in the village.